The luxury firm has launched a diagnosis of its biodiversity footprint as part of efforts to protect its supply chain against the dangers of climate change.

A new Hermès store in Denver.

PARIS — Hermès International is beefing up its biodiversity strategy and taking steps to secure its supply chain against the risks posed by climate change.

The French luxury firm detailed the measures in written replies to questions sent by shareholders ahead of its annual general meeting, which was held online due to ongoing restrictions designed to curb the spread of the coronavirus.

Hermès said its strategic supplies, such as leather, cashmere and silk, all come from renewable markets. For instance, its leathers are subproducts from the food industry, with more than 90 percent sourced in France and Europe.

Last year, the company ran risk analysis on the impacts of climate change on its leather and textile activities, including impacts on biodiversity, based on eight operational scenarios including drought, rising temperatures, heatwaves and hurricanes. These will be used to improve its resilience, the fashion house said.

“The group has adopted a systematic approach to analyzing its sources of supply, with clear diagnosis of the stakes and risks involved in each one, carried out with specialized firms,” it said.

“Based on this information, the group reinforces the security of its supplies; we may implement a diversification policy to limit our dependency on suppliers where necessary, and build up security stocks. If necessary, stakes may be acquired to secure these relationships and sources,” Hermès said.

“In addition, in line with our tradition of creative diversity and the search for the most outstanding materials, the teams at Hermès constantly explore possibilities of using new materials,” it added. The brand recently unveiled the Victoria bag, combining leather and canvas with Sylvania, a lab-grown mushroom-derived leather. 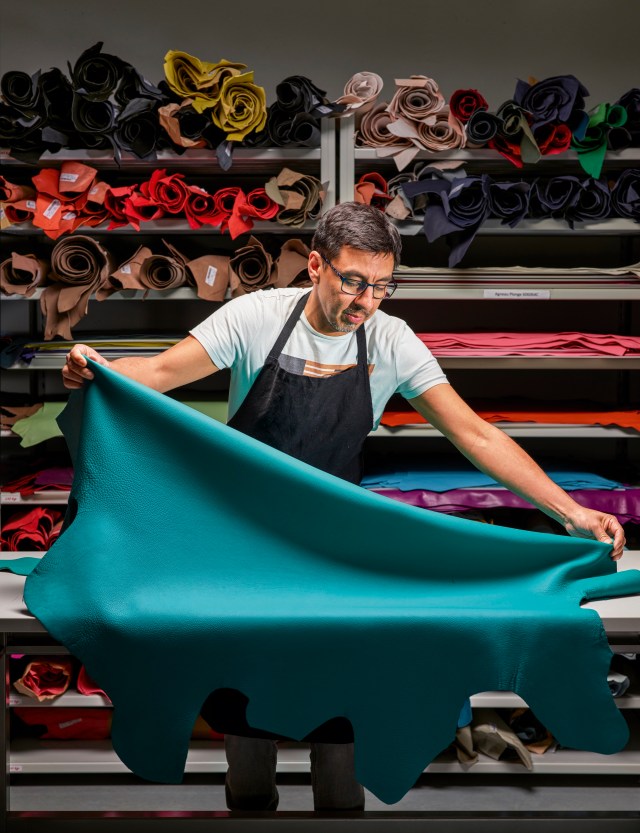 An artisan at the Hermès factor in Montbron, France.  Photograph by Christopher Payne/Courtesy of Hermès

In addition, Hermès created a committee last year to explore pathways for internal upcycling, in silk and cashmere for example, and initiated projects to reuse production offcuts. “These initiatives will eventually help to reduce the group’s dependency,” it said.

Axel Dumas, chief executive officer of Hermès, said the company’s approach was rooted in its artisanal production methods. The company owns 51 production sites in France, including 17 leather goods workshops, and 13 sites in other countries.

He noted the company had made 120,000 repairs in 2020, illustrating the longevity of its products.

“We handcraft high-quality objects designed to last using transparent supply chains, respectful of biodiversity. That implies reaffirming requirements for responsible sourcing with all our suppliers, supporting our partners, as well as a strict audit policy,” he said.

Hermès said it spends “several tens of millions of euros per year” on efforts to reduce its greenhouse gas emissions. The company updated its biodiversity strategy in 2020, with “precise commitments describing clear targets and the related timeframes,” it added.

The company has launched a diagnosis of its biodiversity footprint based on the Global Biodiversity Score assessment, which studies the group’s entire value chain according to the different drivers defined by the Intergovernmental Science-Policy Platform on Biodiversity and Ecosystem Services, an intergovernmental body attached to the United Nations.

“This assessment will identify the areas in which the group’s footprint is the most significant, in order to roll out a comprehensive and rational action plan, both to protect biodiversity and secure resources,” it said.

Hermès also has a number of scientific partnerships regarding the sustainability of its production of ostrich leather, crocodile leather and silk, and its water footprint. “On a more local scale, the leather business line has launched a biodiversity diagnosis and action plan aimed at covering 100 percent of its sites by 2030,” it said.

What Really Makes a Sustainable Material? And Where Does Biodiversity Come In?