With a dominant Gen Z demographic, PacSun hopes the PS Reserve platform will be the destination for “highly coveted styles” that are secured after their initial release and resold at the going market value. While footwear is the focus, apparel and accessories from brands like Jordan, Yeezy, Supreme, Bape, Medicom Be@rbricks and Kaws will also be part of the mix.

Noting the importance of footwear for the PacSun customer, Richard Cox, vice president of men’s merchandising at PacSun, said, “Based on that, we know that we need to deliver a compelling footwear assortment in addition to our great apparel offering. The resell market has really changed the footwear industry, and we had been thinking about how to best participate in that evolution through our own lens, in an elevated and authentic way.”

PacSun will fulfill re-commerce orders but has brought on a special partner to curate the assortment. Michael “Miki” Guerra, founder and owner of The Magnolia Park, will assist in procuring goods, strategically pricing them and confirming their authenticity. Once that process is complete, goods are housed at PacSun’s warehouse.

The campaign mimicked one McCartney held a few weeks ago in Piccadilly Circus where the designer tapped Mert Alas and Marcus Piggott to create fantasy-inspired animal heads, donned by models, in a nod to “rewilding” (a form of ecological restoration) in London.

In both instances, McCartney paired the heads with her pre-fall 2021 collection titled “Our Time Has Come.”

The New York guerrilla activation champions fur-free messaging and invites the public to sign onto the Humane Society of the U.S.’s Fur Free petition. The organization has a near-term goal of reducing U.S. imports of fur apparel by 50 percent.

While McCartney’s brand has been vegetarian for 20 years, countless other companies, including Moose Knuckles, Neiman Marcus Group and Nordstrom, have vowed to go fur-free and celebrities have joined the call.

“With this campaign and the guerrilla activation in New York’s iconic Times Square, I loved that it felt like we weren’t adhering to many rules, but I don’t think as a brand we have ever been conformists or played by the rules,” McCartney said. “This is just another example of how we like to keep everyone on their toes. Giving you something to write about.” 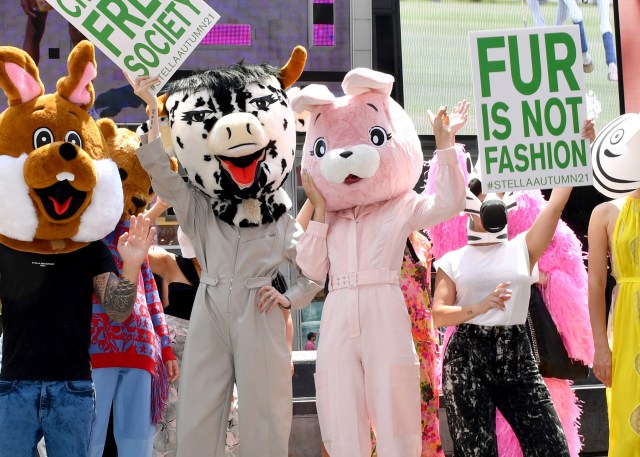 Chemical Cleanup: Bluesign, a technology for sustainable textile production, released its annual chemical substances list, and the details matter to companies looking to clean up their materials.

New registrants to Bluesign may not encounter any need for change, but existing Bluesign-Approved chemicals will undergo a transition period until July 1, 2022 to comply with the revised sections in the Bluesign System Substances List.

The list specifies limits for chemical substances in articles (or consumer safety limits).

Even with the advent of promising eco-materials, researchers have uncovered a number of trace restricted substances including butanone oxime (often used as an anti-skinning agent in paints and blocking agent in polyurethanes). Already considered a carcinogenic substance and included on Bluesign’s List — butanone oxime is one substance under more stringent observation by Bluesign.

Bluesign has plans for a total usage ban of this substance as a blocking agent, as with other changes that signal increased consumer awareness.