For Pinko, Sustainability Isn’t Only About Ethics, It’s Also About Profits

Founder and CEO Pietro Negra discusses the appointment of Patrick McDowell as sustainability design director and why credibility is key.

Fully aware of his company’s impact on the planet, Negra years ago started considering sustainability as something to take into account to guarantee a future for his contemporary brand.

Through Pinko Take Care, the company’s social corporate responsibility division, Pinko developed a range of impactful initiatives, including collaborations with Treedom to support reforestation in Kenya or, in 2014,for example, creating a collection of sustainable bags crafted by women in Ethiopia. Earlier this year, Negra thought it was time to inject a new spin into its environmental and social commitment.

In February, Pinko tapped emerging British designer Patrick McDowell as the company’s sustainability design director — a new role not only for the company, but for the industry, as well.

“In the past few years, I think we have been a bit self-referential, especially because we were so focused on delivering the right products, at the right prices, for the right occasions,” Negra said. “I realized that you need to have the right people on board to be credible. And we all know how it is important today to be loyal to your set of values especially when you talk to the new generations.”

Negra said he found in McDowell the ideal candidate to boost Pinko’s sustainable quotient. “It was love at first sight,” said Negra, praising the designer’s creativity and his knowledge of the sustainable fashion field.

A Central Saint Martins graduate, McDowell unveiled his label at London Fashion Week in 2018 and has always championed a sustainable approach to fashion by employing reclaimed fabrics and ethically produced deadstock materials coming from the warehouses of brands such as Burberry and Swarovski.

The business relationship between Pinko and the designer kicked off in September with the launch of the first Reimagine Pinko x Patrick McDowell capsule collection that included a range of designs, such as patchwork denim, sequined shirts and blazers, as well as capes and coats embellished with jewelry-like details, all crafted from Pinko’s discarded pieces.

Then, in 2021 the collaboration evolved into a long-term partnership. “I’m so happy to have been named by Pinko sustainability design director, which is something reflecting the company’s pioneering vision in its sector,” McDowell said. “I’m aware that sustainability can sound scary, but what I believe is that this needs to be considered as a form of change to implement step by step creating some forms of education within the brand.” 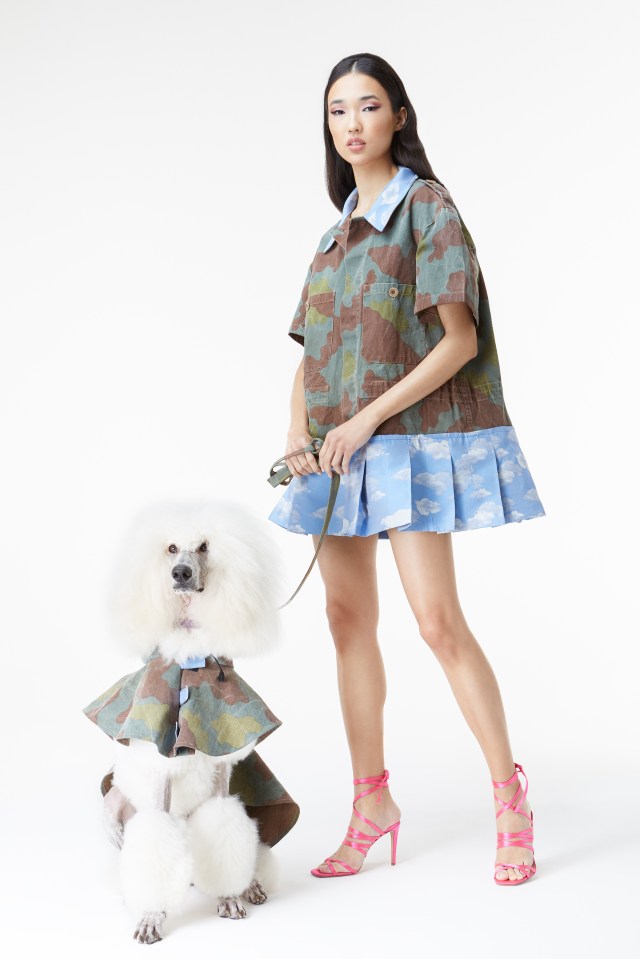 According to Negra, the transformation that is happening in the industry — which has been accelerated by the pandemic — is pushing the company to take a stand against the “bulimia of the industry” and its necessity to produce huge quantities of clothes and accessories to keep it up with the needs of the international markets.

“If we slow down and we reduce volumes, it means that we need to find new ways to compensate those potential losses in revenues,” Negra said. “Giving new life to our discarded garments can be a smart option, enabling us at the same time to create new collections with a high creative value.”

According to McDowell, although in this initial phase he has mainly focused on creating these special ranges, he and Caterina Negra are starting to work more closely to integrate pieces in Pinko’s main collections, too.

While he admitted that bringing in McDowell was a quite big investment for the brand and a step toward greater sustainability, Negra said Pinko still isn’t ready, for example, to release a sustainability report.

“That will happen but not now. If I declare something, I want to be sure that’s 100 percent true,” said Negra, highlighting that one of the biggest issues in this sense is the full control of the supply chain. “Technology and the blockchain are helping a lot, but we have to be honest and admit that there is still a long way to go and we are ready to take that path.”

Pinko, which operates around 250 stores globally and in 2019 posted revenues of 220 million euros, has recently opened a new flagship on New York’s Spring Street, in the heart of the hip SoHo district. Spanning a surface of 4,951 square feet, the three-story store, which features a modular layout inspired by pop-up shops, was designed by Brooklyn’s Mariotti Studio in collaboration with the company’s in-house creative team.

This flagship replaces the brand’s former two shops in Manhattan, which were located on Madison Avenue and on West Broadway.

“This is a real bet, we really went all in for this project,” said Negra. “Over the years, the United States didn’t give us great satisfaction, we made several mistakes and there are things I haven’t understood yet. However, I think we have potential there and I see the opening of this store as a leap of faith.”

Pinko operates other shops in the U.S., including a unit inside Bloomingdale’s in Manhattan, Atlanta and Miami, as well as boutiques at Miami’s Aventura Mall and Bal Harbour luxury shopping destinations.

The company is continuing to invest in its digital commerce, which in 2020 grew 114 percent compared to 2019. “In such a complicated year, it has been our lifeline and now we are working hard to create a stronger, better integration between our physical and digital worlds,” Negra said.