For those still reluctant to participate in the not-new but revamped-for-the-modern-world secondhand shopping category fashion can’t stop talking about, there’s good news and bad news. The bad? Brands that don’t get onboard will be giving money away to platforms that will resell their goods whether they like it or not. The good news is, it’s not too late to play in the sandbox.

Each week, it seems, another luxury player joins the game. This month, it was Oscar de la Renta. Last month, Valentino. And the pace of involvement will continue to pick up at a quicker clip.

The luxury and premium resale market, valued at $25 billion to $30 billion in 2020, is expected to more than double in the next decade, according to a new McKinsey & Company study released Monday. The prediction is a 10 percent to 15 percent annual growth rate, putting the category on a trajectory to be valued between $65 billion and $100 billion by 2030.

“Every serious brand is already traded on Vestiaire Collective and all the other platforms so I think you can decide that you don’t want to participate in it and you can leave the business to the platforms, but you cannot stop that your brand is available on those platforms,” Achim Berg, global leader of McKinsey’s apparel, fashion and luxury group and a co-author of the report, told WWD. “The platforms are out there and the platforms will increase their business.”

Why the reluctance on certain players’ parts? It boils down to three things: some are just late bloomers like they were with e-commerce, others are fretting about cannibalization of new product sales (“that is the elephant in the room,” according to Berg), and some simply aren’t yet prepared for undertaking what amounts to an entirely new business model.

But keeping their distance from the trend won’t serve them.

“If you don’t manage your own destiny, your addressable market will become smaller because somebody else is stealing the resale business,” Berg said. “I think it’s a bit like in the early days of online when people decided not to participate online. But if the growth happens in online and not in offline, then your addressable market gets smaller and smaller. That is quite comparable here.”

The current resale landscape, per the McKinsey study informed by consumer research across North America, Europe and Asia, looks like this: jewelry and watches account for roughly 50 percent of luxury purchases among people who identify as women, followed by 35 percent for handbags and shoes. For those who identify as male, 80 percent is going to jewelry and watches, followed by 15 percent on shoes. For now, the luxury and premium resale market is concentrated in Europe (accounting for 50 percent to 55 percent of the market’s value), the U.S. (25 percent to 30 percent) and China, which accounts for roughly 10 percent. And while much of resale is still happening offline (65 percent to 75 percent, compared to 25 percent to 30 percent online), Berg said “almost the entire growth [20 percent to 30 percent annually] will happen online.” 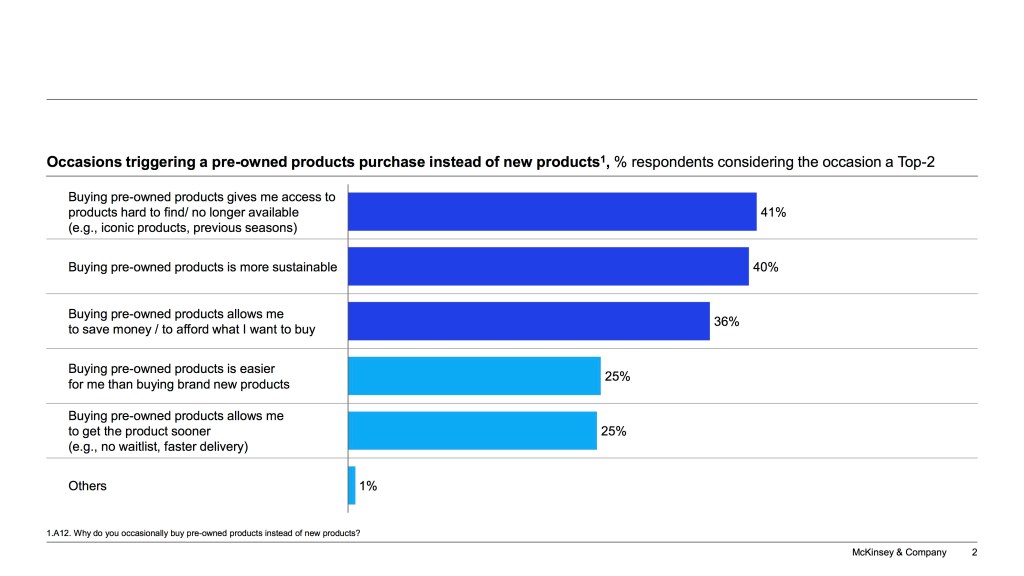 Mostly, consumers (41 percent) shopping high-end resale are doing it to get access to iconic or hard-to-find products, or things that are no longer available. Here’s where a model like Gucci Vault, the brand’s new showcase for rare and exclusive items from its archive that are reconditioned and resold online (alongside select pieces from emerging designers), will likely play well to that cohort. Items from Gucci Vault can retail for prices higher than what other resale platforms peddling the label would offer.

What’s perhaps most telling among the luxury cohort, though, is that 75 percent to 80 percent are “still strictly new-product buyers.”

This, however, is a number expected to shrink in coming years and one that will not blight resale’s growth.

“You either have a younger customer group that aspires to buy a certain brand but cannot fully afford it, or you have a very affluent collector kind of customer that is willing to pay a premium to get their hands on certain ranges that either they missed it or it was so scarce that it was not available,” Berg explained. So, aspirational shoppers will continue to aspire, and the more brands that begin to dig in their vaults and make vintage feel like new, the more those still “strictly new” shoppers will start seeing the luxury in exclusive pre-loved items.

After the rarity resale affords, 40 percent are buying because it’s more sustainable, and 36 percent say it’s the affordability that converts them.

One such upside, according to the study, is that 46 percent of consumers surveyed said when a brand enters resale, they’re positively swayed to buy more from that company in the future. Fifty-four percent said as long as their customer experience remains the same, a brand’s participation in the secondhand market wouldn’t change their desirability for it or loyalty to it. 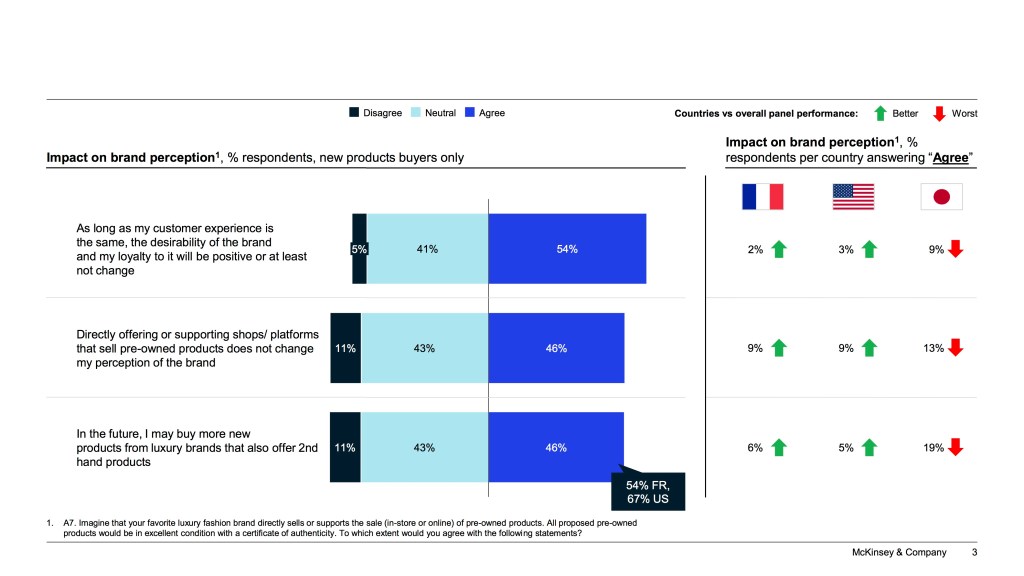 “According to our market research, at least for France and the U.S. — maybe with the exception of Japan — it proves that it is in a sense brand enhancing or it’s not damaging,” Berg said. “So, if that brand is traded and would even actively offer resale, I think it’s even positive for your image with the customer. And why is that? Because it just shows that the products are relevant and durable and even keep a certain value once you have acquired it. I think all of those are positive arguments.”

Another argument? “You can’t change it anyway. It’s happening,” he said.

Next to cannibalization on the list of concerns surrounding resale is how to operationally manage the business. And it isn’t so simple: There’s the sourcing of the product, the authentication of it, the repair and refurbishment of it, the determining whether you’ll use an existing platform or build one (bigger brands will have more degrees of freedom here) and if it’s the latter, that adds a new supply chain to manage.

“For obvious reasons, you cannot tell everybody that you will buy back every single item,” Berg said. “The first choice is from who you buy what and what do you buy.” All of that needs to be navigated without disappointing customers or damaging loyalty — all the while still making margin.

From there, it’s thinking about, “What’s the business model, the operating model you need to install in order to participate in the resale market in a meaningful way? Very few have answers to that and that is why many brands are still at the side watching,” he said. “It’s a whole new business. I think that is the challenge for most brands.”

When it comes to consumers selling their luxury goods on resale platforms or directly to brands already in the sauce, 41 percent are ditching stuff to make more space in their closets, which could imply making room for more stuff, thus still begging the question: does resale really get at the problem of consumption?

Few could have a firm answer to that question, but Berg believes it’s still moving things in the right direction when it comes to sustainability.

“First and foremost, if you believe that the model works and things that are put up also get sold, then the individual duration of usage will be extended, which will be generally good,” he said. “The question is, will the wardrobes get filled to the same extent as they were before? And at least some of the research we’ve done suggests that people want to be more considerate about what they buy and how much they buy, so I would not believe that the wardrobes get refilled to the same extent.”

Regardless, the resale conversation is a fixture and the fast-growing market will leave laggards behind.

“The train has left the station. As always in these cases, the consumer rules and they want resale — full stop,” Berg said. “The question to the brands is: if you accept that you cannot stop it, what are you going to do about it and are you open and willing to further investigate the topic? The very simple business model of you produce something new and sell it to somebody out there, resale shows that this becomes a bit more complicated.”