Human rights nonprofit Remake was one of the top searches this year for sustainability fashion keywords.

The uglier aspects of the fashion industry saw the light this year.

But the pandemic — in all its devastation — could offer the opportunity to rebuild industries with social and environmental sustainability core to every operation, if more money was devoted to critical investments in sustainability rather than just marketing.

At year-end, too many brands are still selectively reporting on sustainability with many omitting some of the biggest themes of the year, like responsible growth and consumption, social justice (particularly as it pertains to garment worker rights and communities of color) and sound Environmental, Social and Corporate Governance (ESG) strategies. For this, many fashion brands and retailers have found themselves on the wrong side of progress — but there’s hope.

Many brands are capitalizing on the shifting tides with some reports calling this year a “pivotal point” for ethical fashion over fast fashion.

And the search engines don’t lie. With more than 7 billion hours spent online, consumers were seeking keywords pertaining to “sustainable,” “ethical,” “Fair Trade” and “eco-friendly” clothing in droves over the year, according to search analytics platform SimilarWeb. Searches for this group hit a peak in July at 101,700 — 84 percent higher than the 2020 average of 55,250. Meanwhile, as ethical fashion hit its own peak in July, new arrivals of fast-fashion products dipped dramatically from July to September, down 11 percent year-over-year, according to Edited’s sustainability report.

“Sustainable fashion has been top of mind for shoppers this year as demand shifts away from fast fashion,” said Caroline Kim, lead apparel industry consultant at search analytics platform SimilarWeb. “Many apparel brands have been bidding on these keywords to target the ‘conscious shopper’ and paid search has become an instrumental channel in their marketing strategies to capitalize on the rising demand for sustainable fashion.”

Still, the majority of consumers do not believe the sustainability claims being hawked at them, and perhaps it’s because sustainability is still being “bought,” so to speak, in the form of paid search and press, versus companies actually doing the work to lessen their impact.

Brands like Everlane (caught up in its own share of myth and union-busting) and Los Angeles Apparel (ensnared in coronavirus outbreaks in its factory) muscled out the competition for paid search engine marketing keywords as well as nonprofits like Remake (behind the #PayUp campaign that helped recoup $22 billion in canceled apparel production orders) and Fair Trade which also earned top paid search results, according to SimilarWeb. These paid marketing efforts drove 15 percent of total search traffic in 2020 compared to 10 percent in 2019, according to SimilarWeb insights.

“Sustainability has become a hot topic as well with high media coverage, so brands hoping to up their share-of-voice will have to compete with, or partner with, magazines and news sites as well,” Kim said. “The search landscape for sustainable fashion is crowded but could prove to be worth the investment.”

Professor Tensie Whelan, founding director of NYU Stern’s Center for Sustainable Business, added, “Again, that’s an inexpensive way to get business,” speaking on resale and rental as an opportunity for free media coverage, given the sheer interest.

The only problem is that competition has become increasingly stiff as more entrants start playing ball with circular apparel, and sooner or later, consumers will ask the hard-hitting questions, which is why there is a rising ESG imperative for brands that hope to sustain themselves. 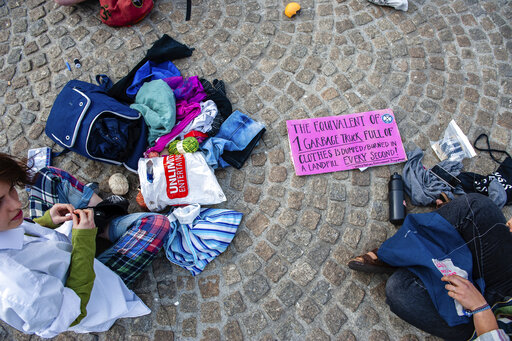 Climate activists are seen sewing used clothes while sitting on the ground. Sign reads “The equivalent of one garbage truck of clothes is dumped/burned in a landfill every second.”  Sipa USA via AP

ESG to Lead the Way

Although experts feared a bifurcation of sustainability progress at the start of the pandemic — as even sustainable companies looked to prioritize cash flow and maintain survival — experts cautioned against short-cuts or abandonment of sustainability efforts.

Consulting firms continued to stress the long-term gains of making investments in sustainability and leading with a core ESG strategy, one that cannot be selectively reported or extensively dolled up in a sustainability report.

“The principles of environmental, social and corporate governance are more relevant now than ever. As we emerge from the COVID-19 crisis, we must ensure that our industry does not slip back to a status quo that fails to adequately protect our people and the planet,” John D. Idol, chairman and chief executive officer of Capri Holdings Ltd., said in an Accenture report. “The fashion and retail sectors must collectively accelerate climate action and create more sustainable supply chains as a part of our global recovery.”

Companies are already making valid steps to cut down on emissions, procure more responsible materials, explore circular business models and reduce waste, for example, but need to ingrain an ESG mind-set across the business — and faster at that.

While sustainability-minded consumer behaviors were already on the rise before COVID-19 struck the world — the shift became more apparent as people returned to nature, showed renewed support for communities of color and as shopping local becoming more prominent, as per a year-end search analysis.

Sustainability is driving the consumer packaged goods industry in particular — even amid a pandemic. An analysis by the New York University Stern Center for Sustainable Business found that while “sustainability-marketed” products account for only 16.1 percent of the market, they delivered more than half (or 54.7 percent) of the market growth for the consumer packaged goods industry from 2015 to 2019, with continued signs of growth despite challenges.

And Instagram and TikTok have also been evidence of the shift. In May 2019, there were just 2.5 million posts on Instagram tagged “zerowaste.” As of March, and prior to the pandemic sweeping across the U.S., the posts had nearly doubled to more than 4.8 million. In December, this number would stand at 6.8 million hashtag uses of “zerowaste” for Instagram and more than 500 million video views for TikTok.

“Consumers’ growing interest in ‘zero-waste’ and ‘no buy’ in fashion and beauty signals growing sensitivities in consumers to question their purchases and align them with their values,” said Elisa Niemtzow, vice president for consumer sectors at Business for Social Responsibility, a nonprofit that advises companies including Chanel and Kering on their sustainability strategies.

There is a rising star-power for activism in fashion, as designers, influencers and industry insiders unearthed a continuation of a tense discussion on the overproduction narrative which is being challenged first with discretionary industries. This year, consumers have increasingly sought to rebalance their needs and values, while putting a precedence on social and environmental justice in the wake of dwindling resources and a turbulent year.

“Cancel culture” also trickled into the high street. U.K.-based fast-fashion retailer Boohoo was one unfortunate newsmaker for its Leicester factory abuses, but the example only further outlined the importance — for both investor and consumer — of creating resilient and ethical supply chain practices.

As documented by nonprofit Remake in its viral #PayUp campaign, there still remains an extensive list of global fashion companies that, even as of publish date, had allegedly not paid in full for orders. Brands that chose to “pay up” may look to consumer trust in the long run, as these coinciding concerns — of employee health, aid to low-wage workers in Asia, reduction of negative impact on the environment — all topped the list of consumer demands from fashion brands, according to a McKinsey & Co. report from April on consumer sentiment for sustainability in fashion.

“It is imperative to build trust and transparency with consumers, as 70 percent are sticking with brands they know and trust during the crisis,” read the report which also echoes findings that B Corporations — those mission-oriented companies like Patagonia that pay a hefty fee to be audited to higher standards of sustainability (and are legally bound to it) — were 63 percent more likely to survive the Great Recession, per B Lab data (the company that certifies B Corps). Experts cited consumer trust as the reason for the greater likelihood of survival. 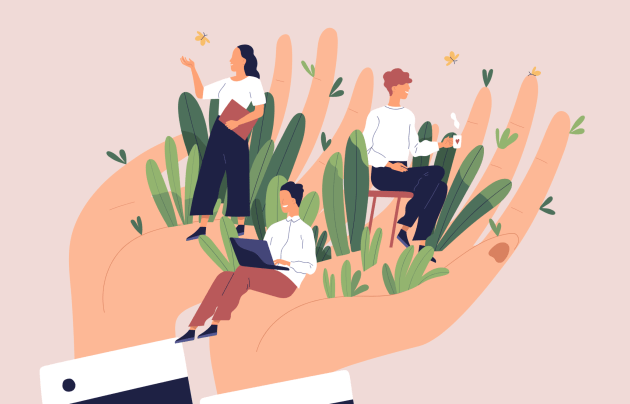 Trust and transparency separate the leaders. Will more companies post their supplier lists in 2021?  Courtesy

In March, Gen Zer and indigenous rights and climate justice activist Xiye Bastida wrapped her year of participating in Extinction Rebellion’s “Boycott Fashion” stint (where she traded out shopping trips at Forever 21 and Urban Outfitters to striking every Friday for Greta Thunberg-founded organization Fridays for Future). By October, Bastida appeared in the launch of Levi’s SecondHand, a buy-back and resale program, notable because it highlighted diverse climate leadership and younger generations who are leading the charge on adopting secondhand fashion.

Resale became a new market for many brands in 2020. Among the resale crew were Nordstrom (with its “See You Tomorrow” resale store format), Walmart, Gap and Abercrombie & Fitch, among other brick-and-mortar mainstays that entered resale (or re-commerce) this year via partnerships.

Designers were also outspoken on their partnerships with resale. Phillip Lim teamed with The RealReal, as both a moral and strategic decision for clearing excess stock, and Christian Siriano with ThredUp. In the latter, Siriano designed a “thrifted” emblem to showcase secondhand.

Resale gained ground in 2020 and is set to seize market share in a post-COVID-19 world as a business that’s more resilient in the face of economic recession. Re-commerce provider Trove which powers resale for Levi’s, Patagonia, Eileen Fisher, REI, Arc’teryx and Taylor Stitch — saw sales up 150 percent year-over-year on resale sites. ThredUp and luxury accessory platform Rebag also boasted increased revenues, with both ThredUp and Poshmark gearing up for IPOs.

With a surge in online buying, consigning and reselling activities — one lingering problem remained: people have too much stuff and companies do, too, as many ended up buried in excess inventory as demand across apparel slipped this year.

In fact, the majority of Americans deplore having “too much stuff,” as per a January survey by YouGov PLC, a global public opinion and data company. As the pandemic took its toll on the fashion industry and many individuals found their closets staring back at them, an unprecedented problem arose wherein donation centers bore the burden. A number of reports stressed that circular investments, including scale recycling, must continue in order to get a grasp of the clothing supply.

No Normal in Sight

Busy shopping scenes were only part of a brief snapshot in July as international cities like New York or London emerged from the first wave of the pandemic with storefronts newly reopened and throngs of shoppers returning for quick deals. That changed just months later when restrictions tightened.

While the usual ultra-fast pace of production slowed throughout these summer months and the holiday season has shown signs of life — uncertainty is now a given as the fashion industry looks to rebuild. Demand is unstable and production was already out of alignment with what consumers actually wanted, so aligning the two to avoid overproduction, overstocks and waste will be among 2021’s critical challenge as the industry works toward recovery.

One thing that remains certain is that sustainability demands will only sharpen and companies must stay the course or risk losing consumer trust that won’t be bought back so easily.

No. 3: Sustainability Is a Given, Not a Goal, While Secondhand and Rental Boom