Lavinia Biagiotti on Nature Ruling, Sustainability at the Ryder Cup

The designer is preparing for the Ryder Cup in 2023 at the Marco Simone Golf & Country Club in 2023 with sustainability top of mind and the democratization of the sport, reaching out to the younger generations.

Lavinia Biagiotti and the Ryder Cup

“My mother used to say this is the biggest green skirt I have ever designed,” said Lavinia Biagiotti of the late designer Laura Biagiotti, looking at the sprawling, verdant course of the Marco Simone Golf & Country Club in Guidonia, outside Rome, which is set to host the Ryder Cup in 2023 — the first time the prestigious event will be held in Italy.

The full reopening of the 18 hole course comes after 18 months of renovation and a complete redesign, specifically with sustainability top of mind. The pandemic caused the Ryder Cup to be moved from 2022 to Sept. 29 to Oct. 1, 2023, but the course is completed, Lavinia Biagiotti said proudly, despite the hurdles thrown up by the health emergency.

The layout was modified “not only to provide numerous risk and reward opportunities for the world’s leading players, but also to maximize the natural rolling countryside terrain, allowing guests the best views of the game,” Biagiotti explained. Looking out in the distance, one can even catch a glimpse of the dome of the St. Peter’s Basilica.

The designer, who is also chair and chief executive officer of the Biagiotti Group, holds the role of chair of the Marco Simone Golf & Country Club, and she enthused about her “dream of hosting the 2023 Ryder Cup coming true.” At the same time, she underscored the steps taken to help the younger generation, also psychologically, with an academy at the course. “Our motto is ‘playing the future’ and we are committed to growing the next generation of golfers. We are now ready to host champions and amateurs from all around the world and we believe that the Ryder Cup is important for Marco Simone and Italian golf at a global level.”

Biagiotti helps about 50 young kids, who are the best players, but there are “even more” who train locally. “There is one girl athlete who has won the gold medal at the European level,” she said proudly.

“The legacy is these kids, they play for free, so it’s very democratic. Golf has this aura of an elite sport, especially here in Italy, and we want to change this. And at this moment of social distancing, there are rules but everyone can also have fun in the open air.”

At the end of the ‘70s, Laura Biagiotti and her husband Gianni Cigna, Lavinia’s father, bought the 11th-century castle of Marco Simone, restored it and built the golf course to prevent additional urbanization of the area. “My parents did not play golf but they wanted to preserve the green and the nature here, yet at the same time provide Rome with a service that would attract international events,” she said.

The redesign of the course was led by European Golf Design in cooperation with Tom Fazio 2nd. In addition to the extensive work on the course, expanded to span more than 172 acres from the previous 150 acres, the clubhouse and practice facilities are being refurbished ahead of the venue hosting the Italian Open from Sept. 2 to 5, three weeks before this year’s Ryder Cup at Whistling Straits. 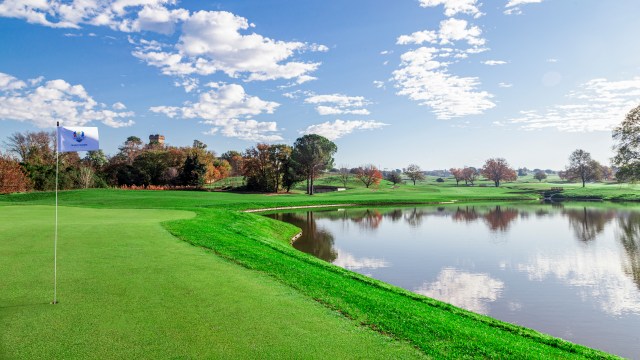 Marco Simone will then host two further editions of Italy’s national Open in 2022 and 2023, before becoming the third venue in continental Europe to host the Ryder Cup following Valderrama in Spain in 1997 and Le Golf National in France in 2018.

Biagiotti said the course features an innovative system to recover rain water, which also helps to drain the field.

In addition, Biagiotti wanted to employ a special turfgrass that grows without the use of pesticides and allows water to be saved. “I just thought I would sow the seeds and the grass would grow, but that’s not how it works. These seeds seemed not to want to grow here, it was either too cold or too hot. It was challenging but then it all worked out. You cannot force nature. We hear a lot about green-washing, and this experience taught me that you must become in sync and in harmony with nature. You can’t and you mustn’t force it.

“This is the greatest entrepreneurial and personal challenge,” she continued. “Nature here is the true challenge; it teaches you to mentally rebalance, in sync with the seasons and not in advance — as we do in fashion. Nature is the law here and it is nature that throws unexpected curveballs. You have to learn to respect and love it, otherwise you are stalled. I learned a lot from this experience, also in fashion, for the use of materials. I have a new approach to work, it’s a learning lesson that I will bring with me for life.”

Biagiotti marveled a few weeks ago at the sight of a very rare and protected bird, the Northern bald ibis, resting at the Marco Simone for a few days. “We have all rediscovered the territory with the lockdown,” she noted.

Biagiotti aims to “be a custodian to give the future a past.” With her fashion group, she has been supporting Rome’s Teatro dell’Opera, and is helping to restore the  Fontana della Dea Roma in the Italian capital.

She is also lending works by Futurist artist Giacomo Balla from the Fondazione Biagiotti Cigna and the Collezione Laura e Lavinia Biagiotti, which comprises more than 300 works, to “Casa Balla. Dalla casa all’universo e ritorno [From the home to the universe and return],” an exhibition to be staged at Rome’s MAXXI National Museum of 21st Century Art, running June 17 to Nov. 21.