McCartney has made trousers and a black bustier top from the sustainable material derived from the root system of fungi.

LONDON — Stella McCartney is dishing the dirt once again, using a leathery fabric made from the root system of fungi, and developed by the California-based Bolt Threads.

McCartney has used Bolt’s trademarked Mylo fabric for two pieces of clothing, a black bustier top and utilitarian trousers. Although they won’t be for sale, McCartney said she plans to integrate the material into future collections.

Both garments were handmade from panels of mycelium-based material laid on recycled nylon scuba fabric at McCartney’s atelier in London. The styles are sporty, and in step with McCartney’s spring and fall 2021 collections.

Mylo is soft, resembles vegan leather and is made from the infinitely renewable mycelium, which appears like clusters of fine thread above, and below ground. Is also used in other fields, including architecture and design.

McCartney first started working with Bolt Threads in 2017, when she plied Mylo into a prototype of the brand’s signature Falabella handbag. In 2018, the bag featured in the Victoria & Albert Museum’s Fashioned from Nature exhibition. 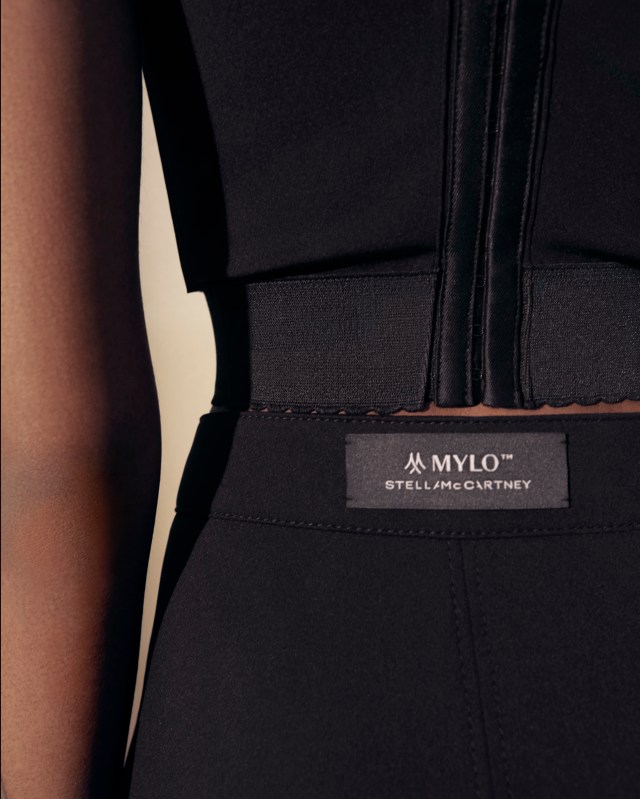 McCartney said she’s “proud to be the first brand in the world to create garments made from Mylo. And I can’t wait to offer this innovation commercially at some point in the near future.”

She believes her community “should never have to compromise luxury desirability for sustainability, and Mylo will allow us to make that a reality thanks to the groundbreaking Bolt Threads.”

Bolt, she added, “shares our same commitment of innovating a kinder fashion industry — one that sees the birth of beautiful, luxurious materials as opposed to the deaths of our fellow creatures and planet.”

Bolt is a biotech company in the San Francisco Bay Area that specializes in advancing sustainable materials. The firm develops fibers from scratch based on proteins found in nature, as well as clean, closed-loop manufacturing processes.

An example is vegan-friendly silk created from yeast, which McCartney has already used in past collections.

According to Bolt, the mycelia it grows for Mylo can be produced in a few days, without the resource intensity of raising livestock, which can take years.

Bolt uses mulch, air and water to recreate ecosystems found under the forest floor to grow the mycelium.

The company said it is trying to eliminate as much of the “synthetic” chemistry as possible during manufacturing. It added the processing and finishing chemistries it uses are “intentionally evaluated and selected” using Green Chemistry principles.

“Since the early days of developing our Mylo material, Stella has been instrumental in bringing it to life and helping to evolve it into the high-quality leather alternative it is today,” Widmaier added.

Stella McCartney is part of a consortium of brands and companies, including Adidas, Lululemon and Kering, working with Mylo and giving feedback to the Bolt Threads team. Widmaier said the aim is to put Mylo into large-scale production.

Bolt also pointed out that Mylo is not petroleum-based, like other synthetic leathers, and that the company has strict screening and testing processes for the chemicals it uses. 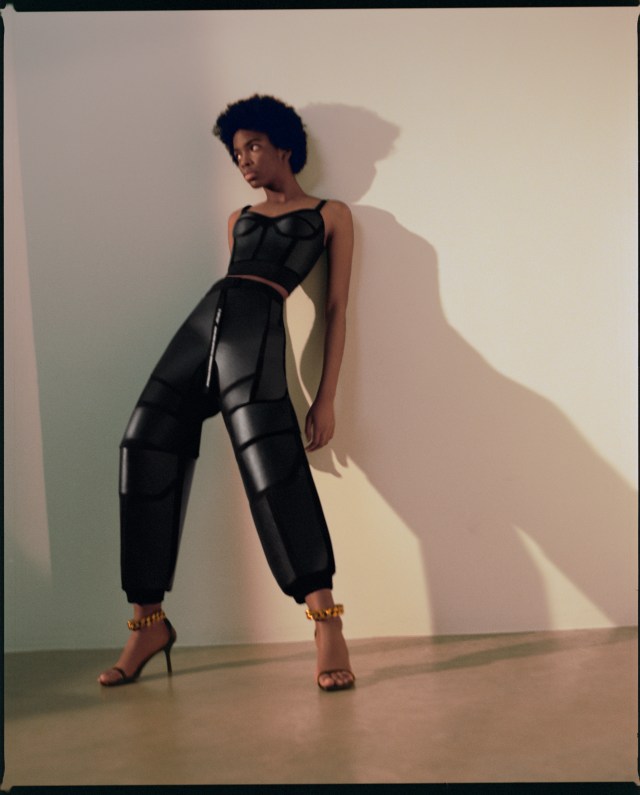 While those chemicals meet the requirements of various Restricted Substances Lists, “we recognize the limitations of such lists in ensuring safety and are incorporating other steps to improve our chemical use policies,” Bolt said.

McCartney works with a number of innovative mills in Europe and the U.S. on sustainable, animal-free materials such as fur, denim and leather.

Her faux furs are done in partnership with Koba, which makes part bio-based, and fully recyclable, fur fibers. She also works with the award-winning Italian denim mill Candiani, which has developed Coreva technology.

Coreva’s eco-friendly stretch denim is made from a plant-based elastomer, and is colored with natural dyes made from mushrooms and seaweed.

McCartney argued earlier this year that her pre-fall 2021 collection was her “most sustainable collection” yet, with 80 percent of the clothing, footwear and accessories made from environmentally friendly materials, and manufacturing.

Last year, McCartney revealed her “A to Z Manifesto,” which she said would act as “a checklist” for responsible behavior by her brand.