Amid awareness of the plastic crisis and veganism, scientists are peering back to plant-based materials, but they're not perfect, either.

A snapshot of materials, from Textile Exchange's Preferred Fibers Benchmark report for 2020.

“If you go back to indigenous science and cultural heritage, there wasn’t any plastic.…Biomaterials, like mushroom leather, some of the techniques that have been around for thousands of years, inspire my work and others,” said Fashion Institute of Technology scientist and professor Dr. Theanne Schiros.

In show of how influential clothing traditions are to today’s innovators, Schiros broke down the outfit details of the 5,300-year-old Ötzi the Iceman. His garments consisted of leather, hide and braided grass stitched together with things like animal sinews and tree bast. He also tapped mycelium (mushroom root) in combination with leather.

In the accelerated push for mitigating the plastic crisis and exhaustive raw material use while appeasing a new guard of vegan consumers, scientists are peering back to natural solutions instead of fossil-based synthetic raw materials.

But plant-powered materials — as with any solution — aren’t perfect, either.

While the advent of new technologies has certainly changed the game for today’s plant-based materials, there’s a deeper origin story.

In tribute to this notion, she has been spearheading a project alongside Mariama Mounir Camara, founder of Mariama Fashion Production and cofounder of There Is No Limit Foundation that focuses on equity, amplification and support of indigenous artisans — especially women — in the post-colonial era.

The project connects FIT faculty and students to a community of more than 300 artisans in West Africa and aims to co-create accessible models for inclusive, sustainable development through textile arts, education and entrepreneurship while celebrating the original stewards of natural material innovation.

The virtual exhibit 6876KM (the distance from the Garment District in Manhattan, New York to The Association of Women Tie Dyers in Kindia, Guinea, where No Limit hosts workshops) went live in late April on 6876KM.com and features natural, zero-waste collections on display with inspirations steeped in resilience. One such piece is a hand-dyed, upcycled patchworked dress from artisan Sarah Nsikak (of the label La Réunion), inspired by Namibia’s Herero tribe whose women overcame attempted Genocide in the 19th century. 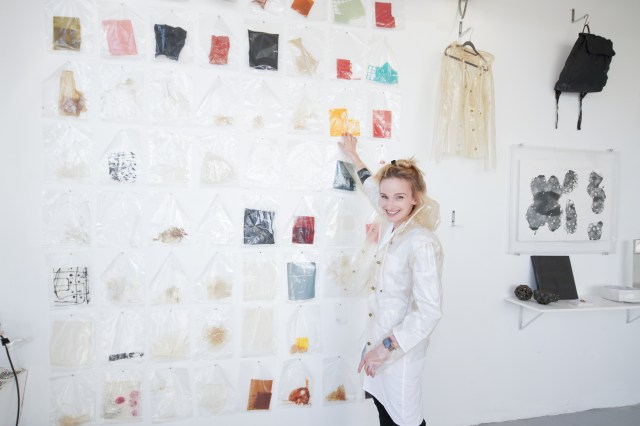 As with Schiros, designer and scientist Charlotte McCurdy — known for a carbon-negative algae-based raincoat — uplifts dyeing and material techniques of the past with today’s technological innovations.

Pointing to the rise of carbon capture technologies and the danger of co-opting terms like “carbon neutral,” McCurdy believes language is vitally important in influencing material culture: “The same thing that happened with the word ‘organic’ with food 15 years ago, that’s happening right now with materials. And if we get the definition wrong — we won’t have the impact we need to have on climate change.”

Lurking in the layers of some plant-based materials are synthetics — denting any edible connotations for textiles made from mushrooms (mycelium), pineapple and more.

Linking up with industry leaders like Stella McCartney, Hermès and more — biotech firms have boosted the allure of modern-day mycelium innovations for industries like fashion — even if they’re not quite ready for consumer hands.

But mushroom “leather” from the likes of innovators like Bolt Threads, Ecovative, MycoWorks, Amadou Leather and others, is just the beginning.

“If you look to nature, there’s all these great stretch and performance qualities,” said Schiros, calling the process “microscopic biomimicry,” tapping the proteins that make skin stretchy or waterproofing abilities from the proteins in a wasp nest, for example. Werewool (an award-winning DNA-programmed color and performance textile) is an example of this in practice while the lab-grown leather concept shoe with Public School New York designers in December showcases ancient textile techniques.

There’s also a growing trend toward carbon capture technologies which enable brands like Covalent — from the Huntington Beach-based biotechnology company Newlight Technologies Inc. — to extract carbon from the air with its novel “AirCarbon” material. 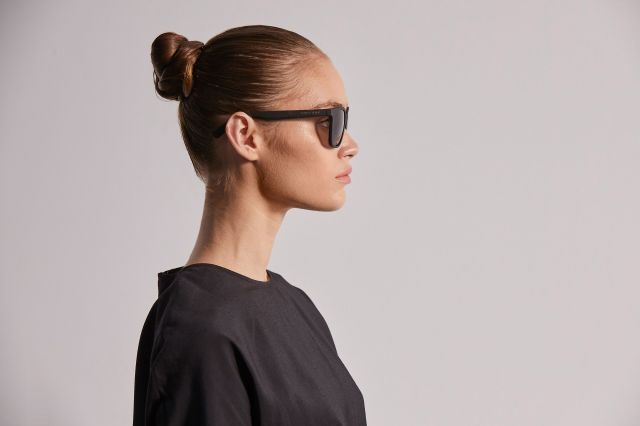 Turning to agricultural waste as feedstock not unlike the leather industry, textiles like Piñatex get its name from the use of excess pineapple leaf fiber, Vegea from apple orchard waste, and vineyards and Desserto from milled cactus leaves.

But these solutions aren’t rid of synthetics entirely, even if in trace amounts. For building durability, it’s common for bio-based materials to pose “hidden synthetics” in the form of solvents, coatings or plasticizers.

When stacked up to leather, materials like Vegea, Desserto and Piñatex are still found to come up short to its universal performance. This is according to a recent study from German researchers at the Filk Freiberg Institute that tested the materials on the basis of tensile and tear strength, flex, water absorption and undue harmful chemicals.

While leather processing isn’t clear of chemical concerns, researchers uncovered a number of trace restricted substances including butanone oxime (often used as an anti-skinning agent in paints) in new eco-materials like Desserto (which was later refuted by the firm).

Some scientists are of the opinion that their presence, if doubly omitted from brand marketing efforts, is putting material culture in jeopardy for the sake of rushing solutions to market.

“[Brands and consumers] want to picture materials being something futuristic that they’ve never heard of,” said Schiros. But the pursuit of “sound bites” over truth, or pushing “this idea that there is one wonder material” is a disservice to innovation, Schiros reiterated, adding “they all have different challenges.”

And with plastic still present in many of the new materials, biodegradability is a ways off and carbon footprinting is still nascent across industry.

The scale of plant-powered materials isn’t where it needs to be.

Production capacity for AirMycelium from New York-based innovation firm Ecovative is 100,000 pounds a year. Meanwhile, leather is measured in megatons (seven million annually per Textile Exchange) because the poundage would escape conceptualization.

However, with the growing consumer awareness about animal welfare as the primary reason for growth, especially in the Asia-Pacific region, the vegan leather industry is estimated to be worth $89.6 billion by 2025, according to Bangalore-based tech solutions company Infinitum Global.

In the excitement of innovations, some scientists are raising interesting counterpoints that come from discounting the social and economic factors of existing industries, like leather and hides.

In an April report, scientists at Epic Biodiversity as well as conservation experts at the International Union for Conservation of Nature, or IUCN, an organization that represents a swath of stakeholders from government, scientific and academic institutions, business, non-governmental organizations and indigenous people’s organizations, voiced concerns with, of all things, luxury turning away from exotic skins.

“Science is the most powerful problem solving tool we have,” said Dr. Daniel Natusch, conservation expert and chair of the IUCN SSC Boa and Python Specialist Group. “Science has shown, perhaps counterintuitively, that luxury brands have an important role to play in conserving reptile species and the habitats they rely on. Ignoring science risks jeopardizing the successful management systems in place around the world.”

Richemont was one company that offered support to the statement, with Matthew Kilgarriff, director of corporate social responsibility saying the company is “committed to underpinning our sustainable development goals with science-based decision making.” Countless others have made public commitments to animal welfare (signing the Kering-led Fashion Pact), third-party auditing (Leather Working Group, for example), recycled leather and bio-based leather alternatives over the years.

“Animal hides are a major by-product of the meat and dairy industry. As long as the consumption of meat and dairy products is an undeniable fact, there is nothing more meaningful than to use these hides — instead of burning them — and to process the resulting leather as a positive natural material with unique and irreplaceable properties,” Nina Conrad, sustainability manager at leather goods brand Leit & Held, said in the Textile Exchange report.

Regardless of each brand’s materials mix, scientists affirm that we can’t afford to lose sight of the high-stakes peril of resource depletion.

“Every decision we make at NFW and every product we release in the market must bear in mind the global impact from who grows and harvests our raw materials to its end of life,” said Dr. Luke Haverhals, founder of Illinois-based biotech firm Natural Fiber Welding Inc.

The firm produces Mirum, a welded 100 percent natural, biodegradable plant-based leather alternative made from a slurry of raw materials like cork, coconut, vegetable oil and natural rubber. Boasting certification from the U.S. Department of Agriculture BioPreferred program, the company also counts investments from brands like Allbirds and Ralph Lauren Corp.

“Humanity’s dependence on plastic and other petroleum-based products has created a scarcity mind-set that is unsustainable both for everyone’s quality of life and the future of this planet,” said Haverhals, noting that it’s signaling a new era of materials that prioritizes sustainable and regenerative methods.

Be it land use or materials mix, fashion must retool every decision to “make it an exchange, not an extraction,” in the words of Nishanth Chopra, founder of Oshadi, who spoke at the Sustainable Fashion Forum last month. 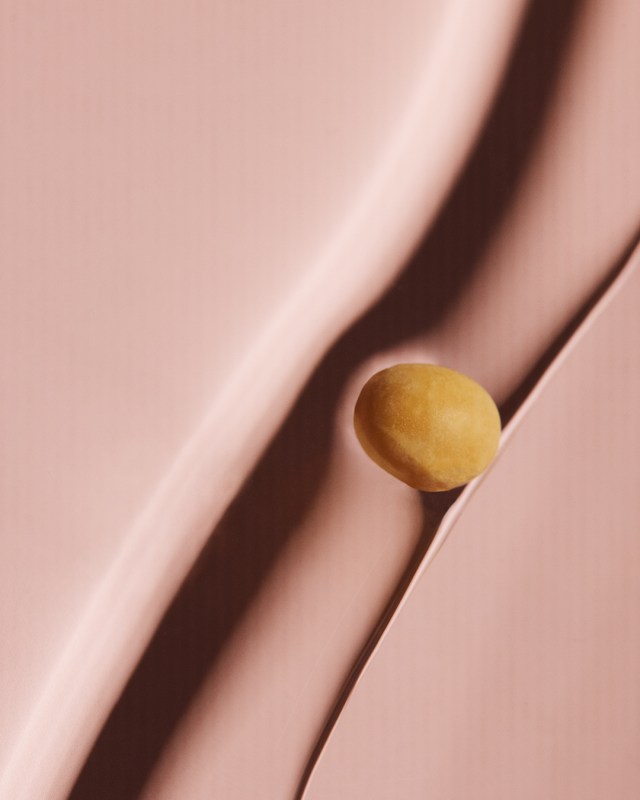 Closup of ingredients to make “Plant Leather,” an innovation from Natural Fiber Welding and Allbirds.  Courtesy

From Edibles to Fabrics and Faux Leather