The Return of Designer-Activists in 2021

Designer-activists internally shaped brands like Esprit and Patagonia, but sustainable activism will look to policy and ESG this year.

Researchers, activists and scientists are looking to reign in sustainable fashion in 2021 by turning back to grassroots efforts and ecology.

The signs are everywhere — literally — as if activists crashing fashion shows and campaigns knocking fashion brands’ integrity weren’t enough of a predictor of what’s to come this year.

Simply put, activism involves vigorous action to achieve social or political ends. Designer activism takes many forms, be it championing change within a corporation or solo for an NGO, bridging an NGO-fashion brand collaboration or taking on change at the policy level.

In the past year, designer-activists raised their voices and leveraged fashion as a vehicle for social change including Virgil Abloh, Prabal Gurung, Bethany Williams, Christian Siriano, Phillip Lim and Stella McCartney, among others.

As fashions notoriously come back around, history shows that designer-activists are nothing new. In 2021, fashion businesses will have to take a bolder stance — and it may be counter to existing norms of growth.

In the 1980s, the corporate culture at Esprit was a “Little Utopia,” as the San Francisco headquarters were called then, where employees were bent toward outdoorsy and socially and politically active lifestyles, even getting perks like free rafting trips and on-site aerobics classes.

By 1990, Esprit launched what was considered a first-of-its-kind campaign against overconsumption (not overproduction) with advertisements counseling followers of the Utne Reader digest with “A Plea for Responsible Consumption.” Two years later, the San Francisco-based company launched its Ecollection — the first ecologically designed clothing line from a major manufacturer. 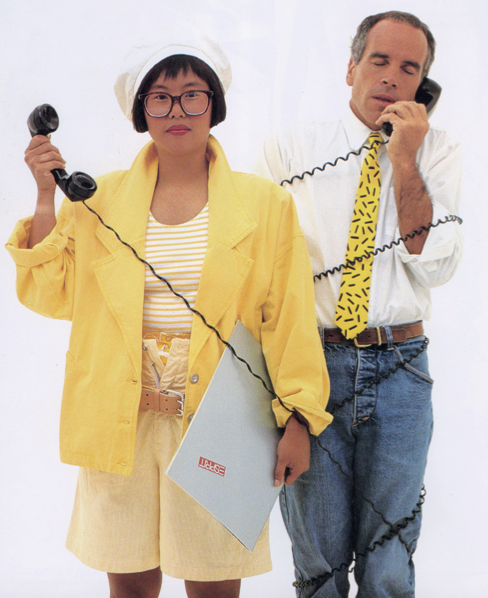 An Esprit ad from its early inception.  Courtesy

“I came to this field while working at Esprit in the late ’80s. I was influenced by the actions of the late Doug Tompkins [North Face, Esprit founder], very close friends with Yvon Chouinard — the very first people to bring sustainability principles into business,” recounted Lynda Grose, California College of the Arts professor, who pioneered the Ecollection at Esprit.

Patagonia would later take a page from Esprit’s book with its 2011 ad in The New York Times urging customers: “Don’t Buy This Jacket” to challenge needless buying. “Buy Less, Demand More,” was one of Patagonia’s latest pleas to shoppers. “[The 2011 Patagonia campaign] sold more jackets than ever,” said Grose. “That becomes a persuasive way of acting in this space. [The ad] is either an abysmal failure or clever marketing.”

Ecollection was a 20-piece women’s clothing line that took inspiration directly from ecological principles and from the brand’s fabric waste to create products (a concept near saturation with the ubiquitousness of “upcycled” designs). The collection was designed to lessen the cradle-to-grave environmental impact with the use of low-impact dyes and organically grown cotton and linen, as well as Tencel brand cellulosic fibers and reconstituted glass and tagua nut buttons. The collection also included a small-run of sweaters that were “Handloomed in Appalachia,” produced by women in rural West Virginia, otherwise without creative employment, in partnership with the social nonprofit Appalachian by Design until 1995. 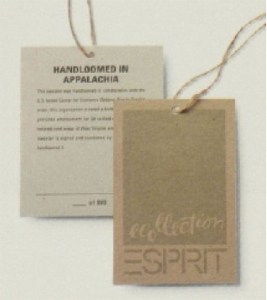 Although the Ecollection product line would operate at a loss at first, it espoused technical knowledge and an ecologically rooted mind-set to clothing that would be a major stepping stone to more industry-led sustainable collections. The only problem is that ecology (and the stakes of farmers and garment workers, scientists and academics) got dropped moving forward, as brand marketing divisions dictated sustainability narratives. Today, Grose is unconvinced corporate change is enough to tackle the most pressing problems — hence the formation of the Union of Concerned Researchers in Fashion.

“Coming from the industry, you realize the restrictions you were involved with, you can only push the current business models so far,” she said. Grose deplores the gridlock of industry-led initiatives, adding, “It gets adapted to industry rather than adapted to ecology. The intention was to provoke an ecological ethic. It hasn’t happened. It’s business-as-usual.”

In 2018, UCRF was formed by a group of professors including Grose (California College of the Arts), Kate Fletcher (London College of Fashion), Timo Rissanen (the University of Technology Sydney, formerly of Parsons) and Mathilda Tham (Linnaeus University) because they were fed up with the industry’s sustainability efforts thus far. 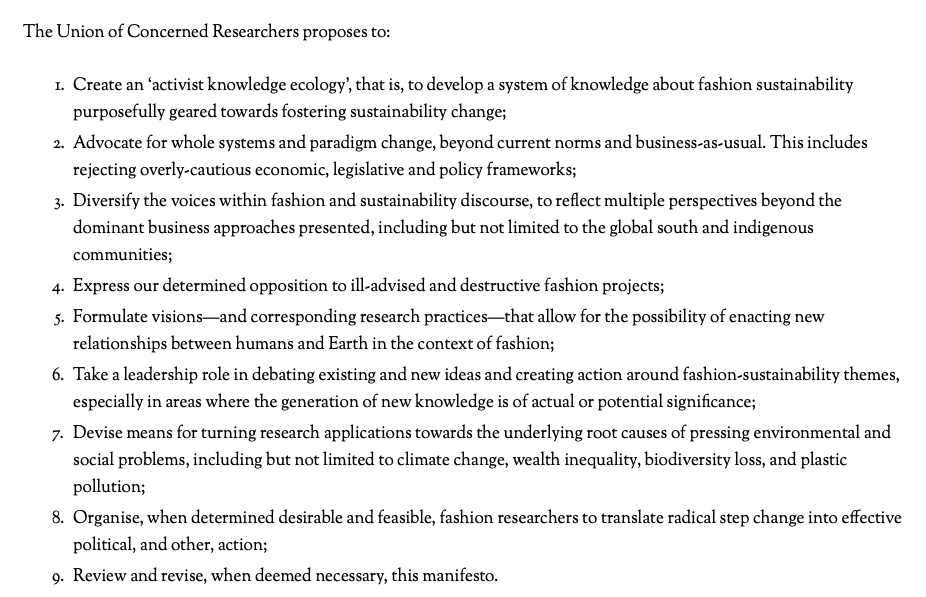 Its website Concernedresearchers.org hosts their manifesto, FAQ page and a blog that details progress on projects like a working glossary of “sustainability” terms, paying respect to a diverse set of interpretations. Some 265 members pay dues of $30 a year which goes toward the group’s initiatives. No outside funding is taken.

While she first believed in harnessing the power of corporate change, Grose said she is less confident today.

“I’ve come to the conclusion that companies need to be restrained in their policy and the way they mention sustainability in their advertising. Companies will say one thing and behind the scenes be lobbying for something else,” she said speaking on her own behalf. “Now that I see how sustainability has been appropriated in that mainstream market, now I’m back to policy.”

And her hunch for policy is on par with the growing governmental attention toward environmental policy, be it a potential international treaty for plastics considered by the United Nations, the European Union’s Sustainable Product Policy, Sweden’s proposed tax on chemicals in clothing or more local policy, like California’s proposed SB 62 (the relaunched Garment Worker Protection Act) — all efforts aimed at tangible, systemic change for the global fashion industry.

“Rather than becoming stronger at navigating an established (faulty) system with the most integrity, and still feeling compromised, designers working at the level of policy start to confront and change the system itself,” read an excerpt from Grose and Fletcher’s book “Fashion & Sustainability: Design for Change,” illustrating the moral crossroads many in the industry feel today. Rebecca Henderson, a John and Natty McArthur University professor at Harvard University, presented the case for unlocking inclusive institutions by maintaining the delicate balance between free governments and free markets in her book “Reimagining Capitalism in a World On Fire,” writing: “The two are complements, and need each other to survive.”

Yet the balance is still tipped one way, as business is trusted more than the government across several polling markets like the U.S., U.K., China and France, according to an oft-cited Edelman survey from 2019. While the majority of consumers agreed a good reputation may get them in the door, they’ll soon stop buying from a brand that hasn’t earned their trust.

With deepening wealth inequality and heightened social and environmental justice issues in the past year, a major red flag for consumers is how businesses view sustainable growth and whom they pin the issue on, and whether they are, in fact, viewed by corporations as “consumers,” whose only role is to buy things, or “citizens” possessing certain rights and maintaining a dynamic contribution to society.

While the UCRF dejects being “anti-business,” it fundamentally sizes up some of the fundamental growth questions — especially that of responsible growth — that have been stewing for some time, themes that dotted many sustainability outlooks for the new year.

“We expect more of the same in 2021, driven by greater focus on sustainability themes by corporates, policy makers and investors alike,” the report read, along with policy tailwinds supporting key decarbonization and sustainable consumption themes.

“Although the U.S. is several years behind Europe in terms of regulatory frameworks and mandating disclosure, the pandemic and social unrest we have seen this past year have accelerated the focus on driving greater accountability to society overall. However, to measure progress and drive accountability, we need a consistent set of metrics whereby companies can be objectively evaluated,” said Nidhi Chadda, founder and chief executive officer of Enzo Advisors, a boutique global advisory firm focused on helping companies build long-term sustainable business models in an ESG lens. She also counts various advisory roles, including mentorship at NY Fashion Tech Lab and XRC Labs, among others.

“In light of the incoming Biden administration and their policies, I would expect the renewed emphasis on climate change to help drive a growing focus on the regulatory environment, which would begin with the U.S. rejoining the Paris Agreement,” Chadda added, citing a proliferation of companies setting science-based targets in accordance with the effort. Her insight echoes previous predictions on how the Biden administration will significantly reroute the U.S. on climate action.

As for Chadda’s key ESG themes for 2021, she sees an increased demand for stakeholder capitalism, a drive for more accountability that warrants greater uniformity of standards and an increased focus on the “S” factor (social impact) within the ESG framework. The latter includes the continuation of hybrid (flexibly remote) and inclusive workplaces, greater accountability toward workplace health and safety standards, focus on employee well-being and mental health, as well as the acceleration of digital transformation across sectors, and increased focus on data security and privacy policies.

“For brands and retailers, specifically, as they are evaluating what is the ‘new normal’ of consumer shopping behavior, expect to see more innovation across supply chain logistics and technologies along with continued emphasis on applied artificial intelligence and machine learning applications to better understand and engage with the consumer, along with investments in the circular economy, including sustainable fashion as well as more measurement tools to track carbon footprinting across the supply chain,” said Chadda.

CAN CORPORATIONS REALLY BE ACTIVISTS?

How can the fashion industry collaborate across all stakeholders and become authentic activists to create a more accountable future — and not just because it’s trendy?

“The greatest roadblock for the fashion industry has been the lack of transparency and consistency across reporting frameworks, which has resulted in selective adoption of standards and lack of accountability,” Chadda said. “I anticipate that the greater collaboration across ESG standards will help the global fashion industry find ways to report on a consistent basis, and the level of technological innovation from the private markets will have a substantial impact in solving some of the industry’s greatest challenges.”

With circularity — including all the activities that keep clothing in use longer — as a continued theme for 2021, experts bring the conversation back to the sacrifices realistically on the line if the industry is truly to bring an impact.