Is sustainability a new American value? By the choice of words, dress and executive orders revealed at the U.S.’s 59th inaugural ceremony — it is a resounding “yes.”

Acknowledging the lives and livelihoods lost and the ongoing fight for racial justice some 400 years in the making, President Joe Biden made a fitting nod to Langston Hughes’ poem “Harlem,” in saying: “The dream of justice for all will be deferred no longer.”

Leading by example as the world watched, Biden broadened his “America United” inaugural theme and is taking, in his words, a “restless,” “bold” and “optimistic” stance on sustainability, too.

“A cry for survival comes from the planet itself — a cry that can’t be any more desperate or any more clear — and now a rise of political extremism, white supremacy, domestic terrorism that we must confront, and we will defeat. To overcome these challenges, to restore the soul and the future of America, requires so much more than words. It requires the most elusive of all things in a democracy — unity,” Biden continued.

And it was not a moment too soon, as on Wednesday, the White House web site was updated to reflect the swift actions coming. New executive orders place emphasis on the environment and racial equity (like rejoining the Paris Agreement, halting a major pipeline project and reversing an order of former President Donald Trump’s called the 1776 commission meant to whitewash history) signaling the changing sustainable tide.

The impending lineup of speakers was further proof of where American values reside.

Beyond differences, “We will become greater stewards of your environment, preserving the land, reaping from it a sustainable harvest and securing its wonderful and miracle-giving power for generations to come,” said Rev. Silvester Beaman, pastor of Bethel African Methodist Episcopal Church in Wilmington, Delaware, and a longtime friend of Biden, during the benediction.

The majority of Americans view climate change as a major threat that requires governmental support, according to research from Pew Research Center conducted in the spring. Too, the fashion industry has come to realize the need for the Biden-Harris administration to be involved in the transition to a more sustainable future.

“When day comes, we ask ourselves where can we find light in this never-ending shade?” began Amanda Gorman, the youngest inaugural poet in memory at the inaugural address. Her reading of “The Hill We Climb” was one of hope, unity and light, complemented by the double-breasted sweeping Prada coat in yellow, a literal ray of sunshine for a talent unmatched at age 22.

The significance resides in this cross-generational outlook for sustainability. The tradition for poets to be meshed within the programming of presidential inauguration ceremonies began in 1961 where Robert Frost was invited not by John F. Kennedy — but by Stewart L. Udall, an environmentalist, activist and former Arizona congressman and secretary of the interior designate.

At age 16, Gorman was named the first Youth Poet Laureate of Los Angeles, the city of her upbringing, and by 2017 she became the country’s first National Youth Poet Laureate. Since a young age, Gorman has imbued social and environmental activism into her work, which is another reason why she often reaches for Prada, a company vocal in its sustainability journey. Gorman was also a guest of honor at the luxury brand’s sustainability conference in 2019.

Unifying speeches aside, sustainability also found its way onto the inaugural stage in ways small (in choice accessories) and large (in a push for shopping small and uplifting Black-owned designer labels).

“Thank you First Lady Dr. Biden for championing diversity, sustainability and philanthropy. Thank you for your leadership and commitment to unity, education and equality. Today is the beginning of a new dawn and I am ever inspired to be part of the movement to create the change that we want to see,” commented designer Monique Péan in a statement. Her eponymous repurposed white hexagonal step cut diamond earrings with white diamond pavé and recycled platinum were worn by the first lady during the inaugural ceremony.

Another predictable, yet nonetheless viral and sustainable moment came from Vermont Sen. Bernie Sanders whose gifted mittens were handmade from old sweaters by Vermont teacher Jen Ellis. The pair were lined with fleece made from recycled plastic bottles. 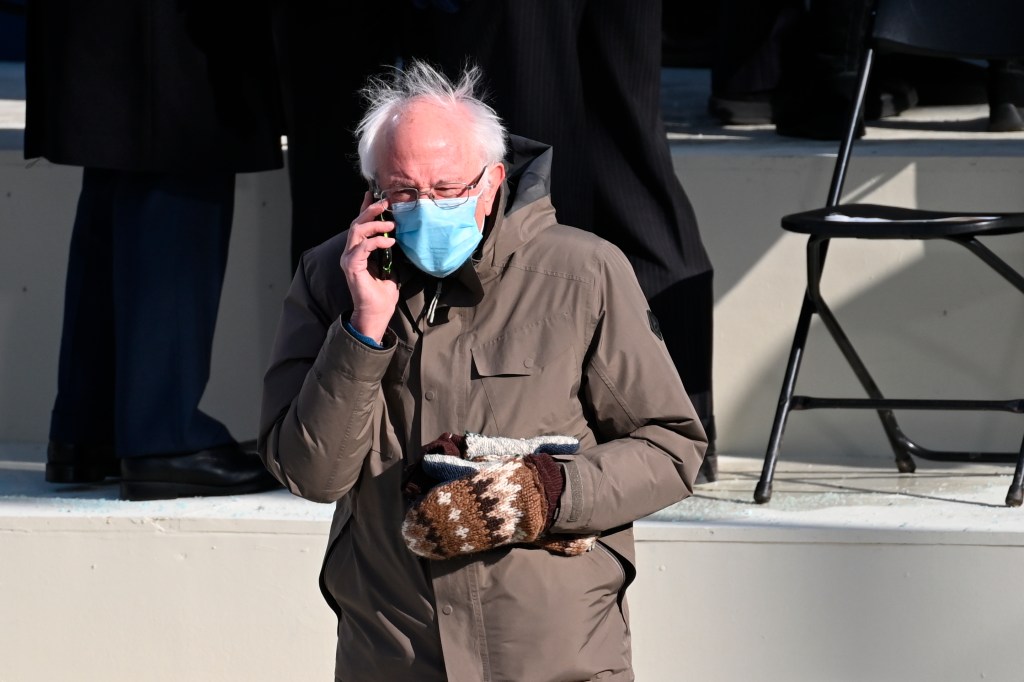 A powerful political statement in the sustainable fashion world is one of simplicity — outfit repeating. Sanders demonstrated this in full effect, rewearing his signature jacket from Vermont-based snowboard brand Burton — no matter the casual look.

Inaugural dress choices matched broader themes nestled within sustainability that showed up in a big way last year, including increased support for shopping local and communities of color.

As for the move to localized makers and domestic manufacturing, the appearance of New York-based label Markarian worn by First Lady Biden, is said to raise the stage of the New York Garment District as a place to rebuild dignified, sustainable apparel work.

Within the theme of unity, sustainability perhaps took center stage at the inauguration ceremony.